Hollywood Boulevard was transformed into the 1980s Sunset Strip on Monday when Van Halen shut down the street in front of the El Capitan Theatre for a performance on Jimmy Kimmel Live. It marked their first television performance since frontman David Lee Roth rejoined the band in 2007.

They started out the three-song set with the classic track “Panama,” from their 1984 album. Diamond Dave wore an open jean jacket with no shirt underneath, showing off a full chest tattoo (see below). He also sported a bandage across the bridge of his nose — hopefully not a sign of backstage drama from the always-tumultuous band. (Actually, according to this YouTube video, Roth hurt his nose with a microphone, bandaged it up, and then started “Panama” from the top with his new look.)

Next up was “Runnin’ With the Devil,” from their 1978 self-titled debut album. Eddie Van Halen showed off his still-solid guitar skills throughout, trading licks with son Wolfgang Van Halen onstage.

They wrapped up the show with “Dance the Night Away” off 1979’s Van Halen II. Roth was up to his old tricks after the song, declaring to a woman in the front row: “I got a hottie right here who’s been dancing all night. … Get her up here!” After she was pulled up onstage, the show abruptly came to a close. 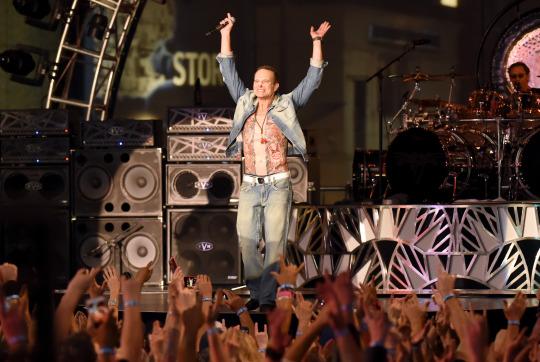 The band is set to play Tuesday’s Kimmel as well.