It took Philadelphia Eagles coach Chip Kelly two years to figure out one simple truth in today’s NFL: You don’t pay running backs big money, not even a really good one.

LeSean McCoy is a really good back and it’s shocking for most people to see a guy drafted in the first few picks of their fantasy league traded to the Buffalo Bills for a linebacker coming off an ACL injury. There are theories that Kelly wants to run off vocal locker room leaders, or that he’s collecting Oregon players like Kiko Alonso, who will come over in the McCoy trade when it’s official (Yahoo Sports’ Eric Adelson had a great read on the Kelly-centric angles to the big trade). Maybe there’s something to that, but I think it’s much simpler. I think Kelly trusts his system to produce a back who can come somewhat close to replicating what McCoy could do, at less than 10 percent of the cost.

And that’s why I think the Eagles won the McCoy-Alonso trade. It made too much sense for them not to do it.

The big numbers in this trade were $24.25 million and $1.69 million. The former is what McCoy is owed the next three years; the latter is what Alonso will make on his rookie contract this year and next, according to Spotrac.

Nobody is spending that much for a running back anymore. McCoy’s cap number this year was slated to be $10.25 million. Buffalo’s Rex Ryan might be the last coach in the league that believes in spending that percentage of a team’s salary cap on a running back, especially one with six years of NFL mileage on him. This quote from guard Todd Herremans, cut by the Eagles this week, about Kelly is telling:

“I think he values the quarterback position in his offense the most. Quarterback and offensive line,” Herremans told PhillyMag.com before the McCoy trade was reported. “I think other than that, I think that he feels like he can kind of, you know, the system will take care of it.”

The Eagles’ next running back is likely not going to be as good as McCoy at his peak. But let’s say the Eagles pick a running back in the third round with the 84th pick. The 84th pick of last year’s draft, Arizona Cardinals defensive end Kareem Martin, got a four-year, $2.8 million deal. At a little more than $700,000 a year, the Eagles would have a back making less than 1/14 of what McCoy was scheduled to make. That extra cap room goes a long way in free agency. You would think about the deal differently if it was announced as something like McCoy for Alonso, cornerback Byron Maxwell and another mid-range free agent addition, and that’s what it might be when all is said and done. And then at running back, can a rookie combined with Chris Polk and Darren Sproles produce more than 1/14 of what McCoy would have? I’d hope so.

[All Draft News, All The Time: Follow Shutdown Draft 365 on Tumblr]

There’s also the issue of whether McCoy is on the decline. His yards from scrimmage went from 2,146 in 2013 to 1,474 in 2014. His yards per carry went from 5.1 to 4.2 and yards per catch went from 10.4 to 5.5. There has to be at least a bit of worry that after 1,761 career regular-season touches that McCoy is slipping. And running backs can hit the wall pretty suddenly. That’s one reason nobody invests in them anymore. Maybe McCoy bounces back, because he is an elite talent. Is that a $10.25 million gamble Kelly wanted to take? Obviously not. And is anyone here willing to bet on McCoy still being more productive than Alonso by, say, 2018? 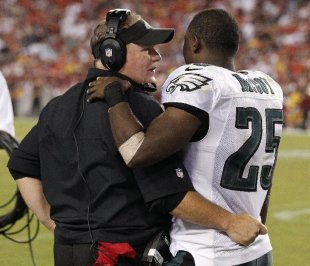 Alonso can’t just be glossed over. He was far from a throw-in on a salary dump. Assuming he’s healthy (and an ACL injury doesn’t generally ruin a 24-year-old’s career, but you never know), the Eagles just added a fantastic inside linebacker. He had 159 tackles as a rookie. Pro Football Focus graded him as the second best inside linebacker in coverage in 2013. The Eagles got a linebacker who they can realistically expect to make a Pro Bowl or five before he’s done. (And on the flip side that’s what the Bills gave up, so even if it’s obvious McCoy isn’t returning to 2013 levels the Bills will keep paying McCoy for two or three years at least to justify trading Alonso.)

We’re in the Disposable Running Back Era in the NFL. Kelly understands that. If he’s right about his system producing a capable running game with or without McCoy (and he probably is right, by the way), he just traded a running back who had more than a 30 percent dip in production last year for a potentially elite three-down inside linebacker and saved more than $9 million in the process. Even if McCoy rebounds and plays at his 2013 level, the Eagles still got a fantastic young inside linebacker and a ton of cap room.

McCoy has been a star player, without a doubt. But it’s hard to see how the Eagles lost this trade.